With Orlando in the center of the state and Tampa to the southwest, they are roughly 80 miles apart and linked by Interstate 4, the region’s primary east-west thoroughfare now being expanded as part of the “I-4 Ultimate” project. It will transform the region, better connect communities and improve the economy throughout the entire “I-4 Corridor” that connects Tampa Bay on the west coast to Daytona Beach and the Space Coast on the east coast, and passes through Osceola County and Sanford.

Tourism–both the vacation and convention markets–and agriculture are Central Florida’s major economic drivers. The region’s high-tech industry is booming, and Orlando now boasts one of the nation’s largest research parks. The University of Central Florida and its engineering, business, and medical schools are playing a huge role in the technology transition, training today’s workforce with an eye to future educational needs of tomorrow’s employers and employees.

Orange, Osceola, Lake, and Seminole counties constitute the geographical heart of Central Florida, where a focus on high-tech industry, investments in education, and an enviable quality of life position this area as one of the country’s most desirable regions. 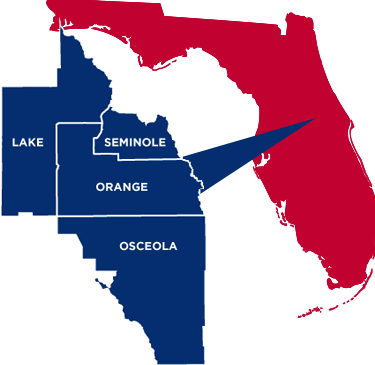